Hey guys! I’m sure you’ve seen the gorgeous balloon garlands literally all over Pinterest and I don’t know about you, but I always thought that they were super hard or you had to have a professional come and make them for you. Wrong. Sooo, my mom had a big birthday and I was convinced that we needed a balloon arch for the polaroid photo booth. And so, since we didn’t have $$$ to get a professional to come do it, my sister and I decided to do it ourselves. The balloon arch turned out so good, so I just had to share a tutorial on how we made it. (believe me, it’s not near as hard as it looks!!)

So first I thought I’d share a picture of the balloon garland we made for my mom’s party! It was kind of a garden party theme, so I decided to go with a rose gold balloon arch. I was a little doubtful at first, but it turned out sooo much better than I ever could’ve imagined!

Then last weekend, my cousin who owns a catering business (and who catered my mom’s party) asked my sister and I to make a balloon arch for a wedding shower. It also turned about absolutely gorgeous!!

Now for the tutorial, I’m gonna show you how to make a smaller balloon arch, but you can totally make it as big as you’d like. The basics of doing it are the same for a small and big balloon arch. This one took me about 30 minutes to make and both of the big ones took about 3-4 hours to make and hang, mind you that both my sister and I were doing it. (although tbh, hanging them was the hardest part 😛 )

Here are the supplies I used to make both a small and a large balloon arch:

*Okay, so I know that this looks like a little kid’s toy and frankly, a piece of junk, but seriously, go buy it! (don’t worry, nobody is paying me to say this XD) I was so, so glad that we bought it. It’s so much better than any hand pump and when you’re blowing up 200+ balloons in an hour it is totally worth it! It also blows up the balloons sooo fast, I think that it took us about 45 minutes to blow up all the balloons for the large balloon garlands.

**I’d recommend getting the balloon weights for when you hang the garland. Even though the balloons aren’t helium, they’re so lightweight that they don’t want to hang down on the command hooks.

Alright, here’s the tutorial for the small balloon garland! I’ve never done a video on here before and this could DEFINITELY use some improving, but it was fun to make and turned out alright, so I thought I’d share. Besides, I think that it’s much easier to learn something like this from a video, instead of just from photos. 🙂

And here are some photos of the finished balloon garlands!

I hope you guys enjoyed this tutorial and that you’ll try one of these yourself! If you guys do make this, I’d love to see! 😁

14 thoughts on “How To Make A Totally Gorgeous Balloon Garland” I’m passionate about empowering teen girls & women to live out their God-give dreams and fulfill their purpose. 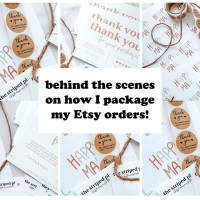